Most of us probably remember working up the courage as a child to get in line for that scary-looking roller coaster at the amusement park.  In many cases, the anticipation of the ride was scarier than the ride itself; though usually at some point along the way we thought: “Is this over yet?!?”

Some of you are probably having the same thoughts now about the decline in your investment accounts.   And though we had seen some rebound off the June 16th stock market lows, it turns out that the roller coaster ride is indeed not over yet.

Others may see the current markets in an opportunistic light. As Warren Buffet famously said, “Be fearful when others are greedy; be greedy when others are fearful.” There are plenty of buying opportunities in a market that is 20% cheaper than it was at the beginning of the year.

Both mindsets, “fearful” and “opportunistic”, have a voice in today’s economics. Neither is wrong or right. The goal of this writing is to help provide objective context rather than the “clickbait” that you see in media headlines.

The Federal Reserve raising the Fed Funds Rate (overnight lending interest rate) by 0.75% was expected. But what continues to roil the markets are the increased expectations of future rate hikes.  The Federal Reserve is serious about getting inflation under control, and they are willing to accept some collateral damage to the economy as needed.  As people and businesses encounter higher borrowing costs, less money will be put to work and the economy will slow down…and along with it the cost of goods & services.

Brad McMillan, Chief Investment Officer for Commonwealth Financial Network, said it well: "The Fed is performing surgery right now on the economy.  In the short run, it is painful. But in the long run? It is a healing process and one that sets the stage for a healthier economy and markets."

We heartily agree with this statement.  There have been unprecedented increases in the cost of housing and household essentials, but not enough wage growth despite the hot labor market to offset these increases.   Though a recession might be the “reset” our country needs, some comfort can be taken in the fact that recessions are generally short in duration and much smaller in magnitude in comparison to economic expansions. 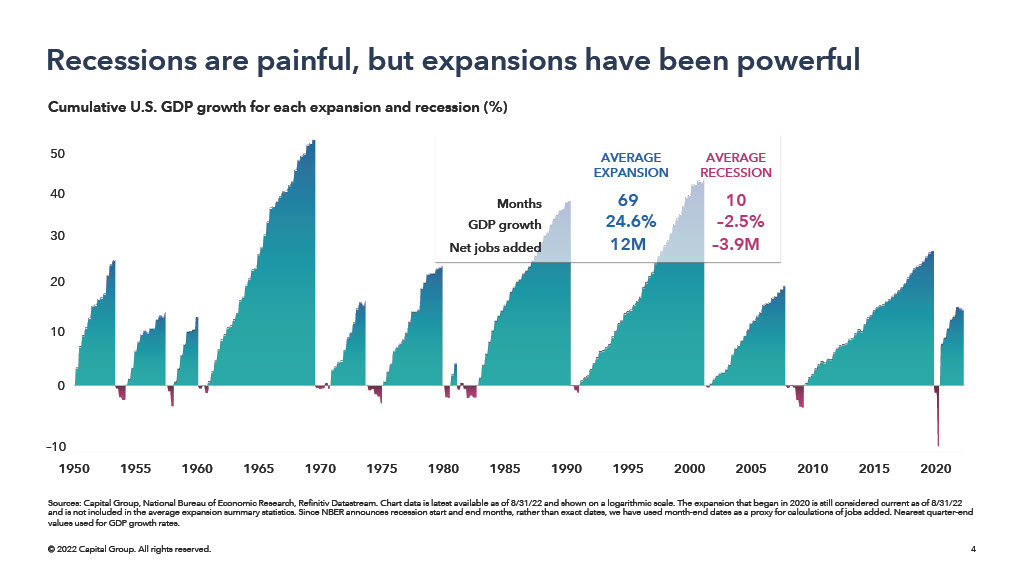 Your investment accounts will rebound – likely well before a current or impending recession is over.   The chart below is a good example of this.  It depicts the average change in the S&P 500 Index and the economic activity (using industrial production as a proxy) of all economic cycles from 1950 – 2021.  Stocks have proven to be a leading indicator of the economy over the years.  This means they reverse their decline before the economy does. 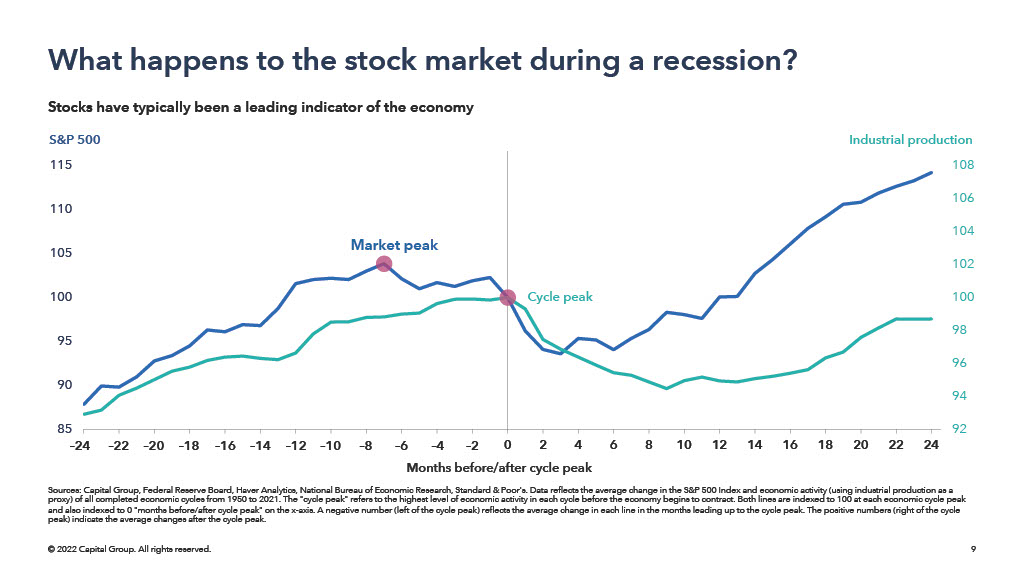 For those with significant bond holdings, there is also a silver lining to the losses in bond values experienced this year: higher interest rates beget higher income payments!   The last chart below illustrates the significance of this.  Interest contributes much more to total bond returns over time than price appreciation  (or depreciation as is our current state).  Again, sometimes we need to experience short-term pain for long-term gain. 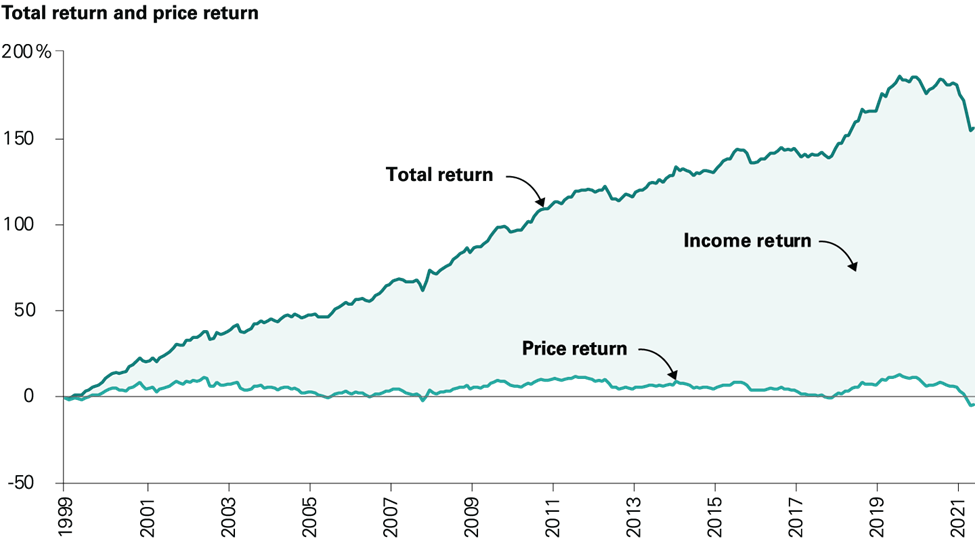 We are in the “white knuckle” part of the ride. No one yet knows if we are in the middle or towards the end, but now is the time to hang on, keep breathing, and know that it’s OK to close your eyes for a bit. Like all roller coaster rides, we’ll eventually get back to where we started and long-term investors will be rewarded.