These concerns caused the major US Equity Indices to all drop about 5% in value over the past week.  US Equity markets have had an incredible run over the past 12 months, the S&P 500, DOW and NASDAQ all hit peaks at the end of January before we entered our current correction (10% drop or more from the peak).

Are the concerns we are seeing in the news and the recent market sell-off telling us the bull market in US Equities is over?  Are we now entering a recession?

Of course, there are no guarantees in investing, but based on two of our favorite indicators we think the answer to both questions is NO.  The bull market is not over yet and we are not in a recession.

The two indicators we like to look at that give us a high-level perspective of US Equities and our economy are:

The Yield Curve as a Predictor of Economic Growth

The slope of the yield curve—the difference between the yields on short and long-term maturity bonds—has achieved some notoriety as a simple forecaster of economic growth. The rule of thumb is that an inverted yield curve (short rates above long rates) indicates a recession in about a year, and yield curve inversions have preceded each of the last seven recessions (as defined by the NBER). One of the recessions predicted by the yield curve was the most recent one. The yield curve inverted in August 2006, a bit more than a year before the current recession started in December 2007.  The current yield curve has a normal slope and it has improved slightly over the past three months.  This indicator tells us that a recession is not in the near-term horizon.  In fact, according to the Cleveland Fed, the probability of a recession in the next 12 months has decreased from the beginning of the year and currently stands at 11%.

Every day the DALI tool compares asset classes to one another to determine which asset classes are the strongest or weakest when compared to one another.  If you think about your favorite sport, they rank teams based upon how well they perform against their opponents.  The more games, matches or races won, the higher in ranking the team will go.  Historically, when US Equities are in the #1 or #2 spot the best course of action is to ride out any market turbulence and/or buy equities on the dip.  The chart below shows US Equities continue to hold onto the #1 spot in the DALI ranking system. 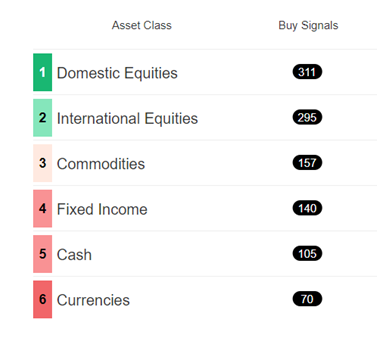 Relative Strength is a measure of price momentum based on historical price activity. The relative strength strategy is NOT a guarantee. There may be times where all investments and strategies are unfavorable and depreciate.  DALI scores as of 03/23/2018.

The current market sell-off and headline news are real and can create stress.  However, when we take a step back and review two of our favorite indicators as described above, we feel now is a better time to be a buyer of equities and not a seller.